Having a spring break at my current school sites allows me to push myself physically and mentally with my bike adventures! Having accomplished the Monterey to Morro Bay ride last year, it only seemed fair to head North along the stunning and daring highway uno! My plan was for three days of riding but I made it in two thanks to a very generous tailwind on day two!

Day One: Monterey to Santa Cruz!! 50 miles of artichoke and strawberry fields bordering  a gorgeous coastline! I had done this ride before in the opposite direction, so it was nice to be familiar with the agricultural backroads that can be a bit confusing.  You always feel a bit out of place with the tractors and trucks rightfully using these potholed paths to tend to their produce! Luckily no other cars dare to bounce along these roads making it easy for trucks to give you ample space when passing.

There are about three miles when you have no other choice but to brave highway 1. There are almost always a lot of cars out here and I really couldn’t stand it so I actually rode in the opposite direction. This is a big no-no for cyclist, but given my late start I didn’t see any other bikers and decided it was worth the risk.  I felt more confident being able to analyze if each driver was paying attention to me and the road. I definitely want to invest in one of those dorky mirrors to attach to my glasses.

After the three miles were up I was blissfully bobbing along again on the backroads! I

had finally mentally processed through all of my work related thoughts and was able to start a true mental spring break! I daydreamed while rocking out to my favorite Bebe Pandora station and before long found myself in Aptos.
After 4 hours of isolated riding, I was in for a shock by the immediate social interaction by the other coffee custome 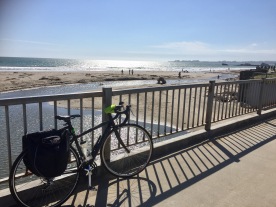 rs. One lady said that we were now friends because we had
shared a laugh together!

After being recharged I continued along the side roads
to Santa Cruz where I tried to blend in with the local hipster bikers that clearly knew the best route into central Santa Cruz.  I fi
ally made it to Bobby and Amy’s charming home for a grand total of 50 miles!

I had quite a headache from the constant sun beating down on my black helmet, but nothing an ad
vil and good meal couldn’t fix!

Having almost all backroads and bike paths on this Monterey to Santa Cruz bike route makes this ride very enjoyable in both directions!

Day two. My initial plan was to make the 48 mile ride to Half Moon Bay. But, Amy and Bobby must have given me some good luck with the wind as I had a very strong tailwind the entire way, which made this ride much easier than day 1. Plus staying on highway 1 the entire time (with not many cars) made for a very fast and smooth ride. There were only a couple of memorable climbs that reminded me of the physical challenge I was embarking upon.  I had left a bit before 9 and arrived to HMB at 1pm.

After a full lunch, I decided that I would continue on to see how far I could get. There weren’t too many hills to start, so it wasn’t long before I was passing the Pacifica bowling alley! I learned quickly that I had to find some backroads once I got to Pacifica, which brought me to the breathtaking pier and black sand beaches! 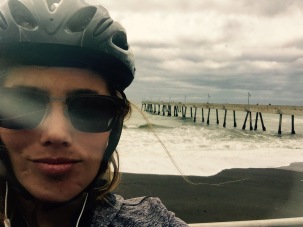 Just after snapping these photos, I started to see signs for an actual bike route, which led me to the hardest climb of the day: Skyline Drive! This usually wouldn’t have been too challenging, but being the end of the ride, every stop sign became a couple minutes of resting. The local residents gave me looks of pity! If only they knew just how long I had been biking. 🙂

After this hill, I took some time to create a plan to get home to Monterey. I was debating between catching the CalTrain to San Jose or taking the bart to the airport and trying the Monterey airbus. I had decided on CalTrain, but after only a mile through the San Francisco State University Campus, I realized that I was much closer to a bart station. Then, it started to rain which made my decision much easier. I jumped on the first bart to the airport and upon researching I realized that I would arrive just minutes before the Monterey Airbus. I had originally called the Monterey Airbus before I started my trip and the operator said that they absolutely don’t accept bikes unless they were in a bike box, but I decided to take my chances and quickly grabbed some extra cash from an ATM to tip the scales in my favor. The driver was extremely nice and he said that as long as I take off my front tire, he could squeeze us both in!  I tipped him kindly for the favor and sunk into what felt like the most comfortable seats ever!

My timing couldn’t have been better with the bart and airbus, so I was even home in time for a beer and burger at Alvarado brewery with some friends!

I haven’t been biking much lately, so I’m very impressed that I was able to push myself to bike 72 miles along a fairly challenging coastal ride. And, I must say that the tailwind and shade from the clouds contributed to my success! 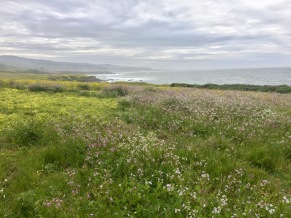 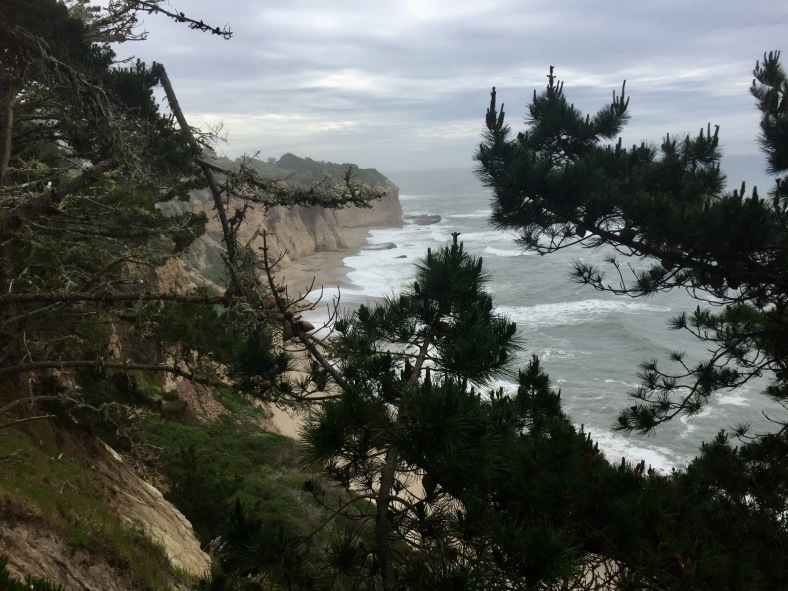